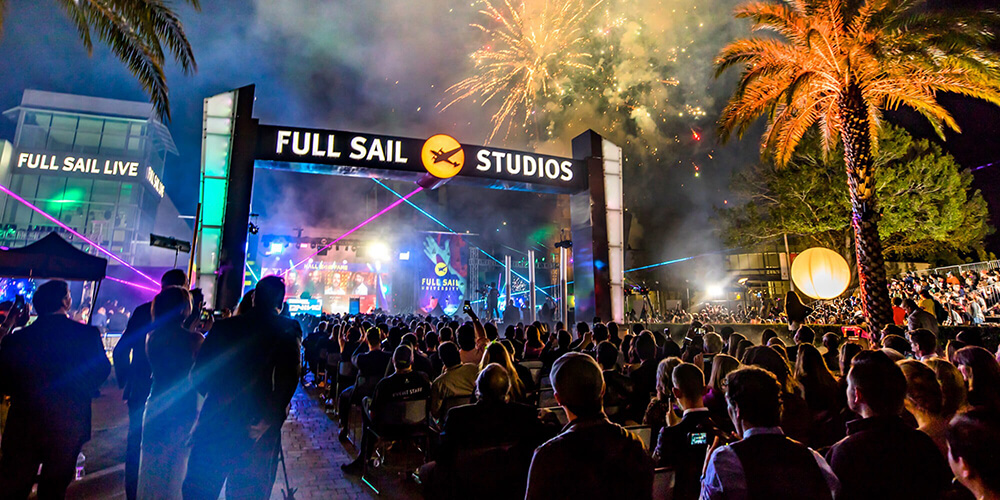 Since Full Sail’s inception in 1979, over 70,000 graduates have prepared for careers in the entertainment and media industry. The following features some of the highlights of Full Sail’s history as well as that of our graduates.

In 1980, Full Sail moved from its original home in Dayton, Ohio to Orlando, Florida. During the six years that followed, new audio courses were added to the original recording arts offering until, in 1986, the Recording Arts Comprehensive Program was introduced. In 1988, a new curriculum with a focus on the visual arts was born — the Video and Film Production Comprehensive Program. In July 1989, Full Sail moved into its current home in Winter Park, Florida (a suburb of Orlando) which has since expanded into a 110+ studio multimedia campus.

August 1990 marked a milestone in history when Full Sail received accreditation allowing students to earn Specialized Associate’s Degrees upon successful completion of the curricula in the Recording Arts and/or Film and Video Production Programs. A third Specialized Associate’s Degree in Digital Media was launched in March 1995 – this addition marked Full Sail’s entrance into training for the vast, emerging field of interactive media.

Another milestone was achieved in August 2005 when three of Full Sail’s Associate of Science Degrees were revised and expanded to become Bachelor of Science Degrees – Computer Animation, Digital Arts & Design (formerly Digital Media), and Film. In April of 2006, the Entertainment Business Bachelor’s Degree Program changed focus slightly and was renamed Music Business.

October 2007 was a historic month, with the introduction of Full Sail’s first online degree program — an online version of the school’s existing Entertainment Business Master of Science Degree Program. The launch of this first online degree was years in the making and saw the school build a proprietary online learning platform from the ground up.

In March 2008, Full Sail was granted University status and became known as Full Sail University. Since then, the school has continued to expand its online and campus degree offerings into new fields, including Simulation & Visualization, Computer Science, and more, while also revising and expanding its flagship Recording Arts and Show Production programs to be offered as Bachelor of Science Degrees.